Together for Ipswich Ukraine Response

In January 2022, my intention for the following twelve months was to write and publish two more books.

Then the Russian Federation invaded Ukraine.

On the basis of my working knowledge of the Eastern Slavic region, my hands-on experience with various disaster and refugee responses around the world, and my love for seeing practical expressions of the One Church in a town, Together for Ipswich asked me to coordinate their Ukraine Response.  In liaison with our local authorities and other civil partnerships, the Together for Ipswich acts as a bridge between the 80+ churches in town, and the local authority, civic and volunteer agencies, all for the well-being of the town's residents and society.

This page highlights some of the things we have been doing in the Ukraine Response, and the values that underpin those actions.

​Together for Ipswich Ukraine Response Review

Published in January 2023, 'Silver Linings' is my 51 page review of the way local churches have welcomed those from the Ukrainian community who made Ipswich their home in 2022.  The review includes the ways we have sought to match sponsors (hosts) with guests, the cultural training we have given, the community hubs we have set up, the lessons we've learned as we've worked alongside other providers, events such as Vigils and Job Fairs, and stories from hosts, Ukrainian guests and service providers.
READ THE REVIEW IN BOOK FORM 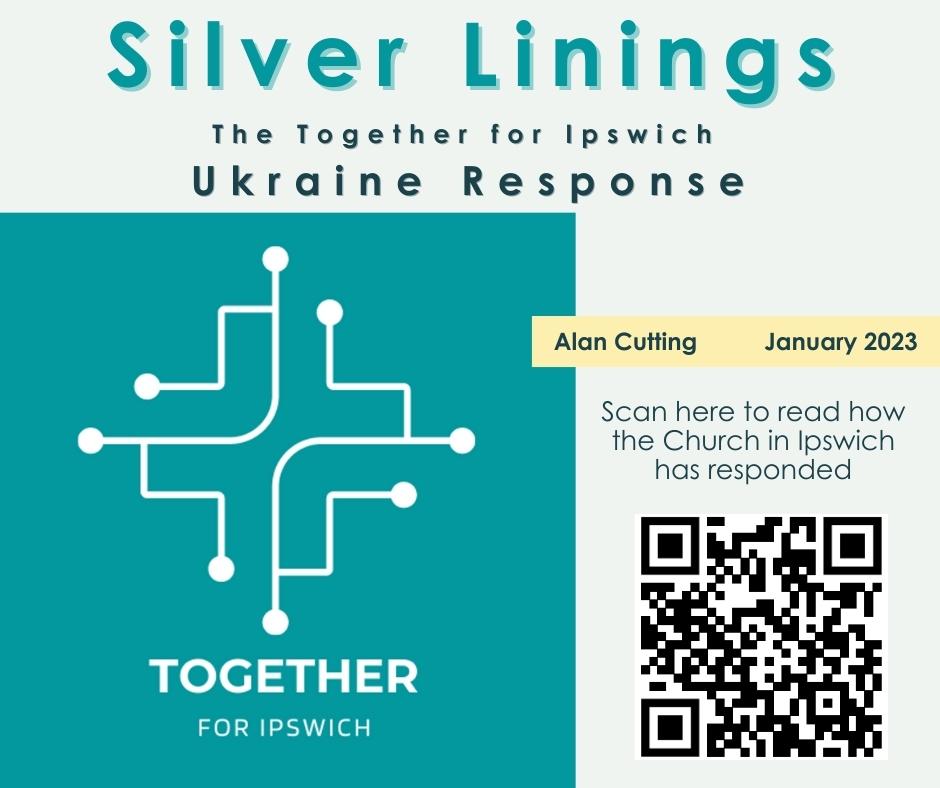 In times of crisis, it is easy to panic into making rash responses that are not thought through well enough, and which become unsustainable and even harmful in the mid- to long-term.  ‘Do no harm’ is a value weaved into all our messaging.  Decisions such as inviting a potentially traumatised guest from an entirely different culture and language into one’s home for 6-12 months should be considered very carefully, ‘slept on’, and fully agreed with all family members and others who might be impacted.

So many practical aspects of life in the UK, such as finding a doctor and dentist, biometrics, job centre appointments, rightly and inevitably consumed many sponsors’ time and attention in the first few weeks of hosting but, in the longer-term, the most successful host/guest relationships have been just that, a relationship.  Events such as ‘Suffolk Tours’ and Christmas parties were not merely organised to be the frilly edges of our response, but were fundamental to the building of good, wholesome, kind and trusting relationships.  The statutory health and educational agencies rightly took up their responsibilities to provide essential services to our Ukrainian guests, but who would accompany them to their first doctor’s appointment; who would stand with them at the school gate?  This relational ‘soft support’ makes the difference between a ‘house’ and a ‘home’; between functionality and integration.

3) 90% of trauma recovery can be worked out through giving space and time.

Where there is significant trauma, specialist services are available and invaluable, but we have found that despite the ongoing horrors of what their nation is facing, giving permission, space, time, and a healthy environment in which to lament and stabilise, and arranging peer support for our Ukrainian friends, are among the best things we can do to facilitate steps towards inner peace and healing.

4) Good mission is seeing where God is already at work, and joining in.

This response has taught us again how churches should be supported in doing things their own way.  Some churches focus on forms of gospel proclamation, others on community and social action, and others still on prayer and sacrament.  Words, works and wonders.  The proclamation, the demonstration and manifestation of the one gospel.  It is not the role of TFI to influence doctrinal emphasis, but to cheer on each church in the values and the ways they already feel called to serve God.

5) The priority of learning English, securing a job, and finding a home.

Within weeks, it became very clear that to establish oneself in the UK, our Ukrainian guests arriving in the UK were faced with these three massive priorities.  However wonderful the host, rural placements came with severe limitations of access and transport, creating issues and barriers with regard to these three priorities.  And churches and hosts alike had to adapt from being those who kindly ‘did things for people and gave things to people’, into becoming equippers and mentors in the challenging task of supporting their guests to stand on their own two feet.  ‘Aid’ had to turn into ‘development’.  This process will continue well into 2023.